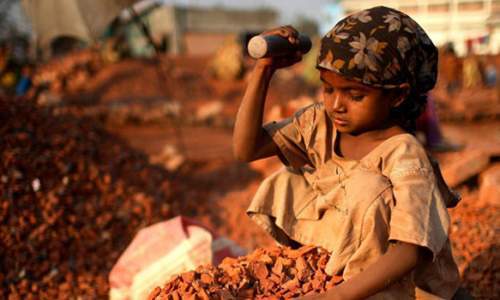 Child labour means, the exploitation and ill treatment of child through any form of work which deprive that child from childhood , where such labour work prevents that child from attending school. Which is morally, socially, physically, mentally very harmful for that child.  Such exploitation is declared illegal by worldwide legislation including Pakistan.

There are many laws made in Pakistan at federal level, as well as at provincial level which clearly prohibits child labour.

A large number of children still constitute  significant part of labour force in Pakistan, legislation relating to child employment are  still not straighten up according to article 5­-A of the constitution of Pakistan which clearly states that,

’’The State shall provide free and compulsory education to all children of the age of five to sixteen years in such manner as may be determined by law.’’

But even in the presence of these laws, the employment of children’s remain unaddressed particularly in sectors like agriculture, factories, small car workshops, shops, hotels, cinemas, vending on the streets, the fishing industry, mining, brick kilns, bracelet making, packing and construction etc.

Immature and inexperienced child labourer’s might be totally unaware of the short and long term risks involved in their work. Children who work frequently face serious health problems due to continuous work in hazardous conditions. The employers also don’t care at all about child labour that are unhealthy and carry on working for long time with a tiny or no break. Child labourer’s are mostly without a basic education, regular social interaction, and emotional support from their family.

Lifetime physical and emotional hurt to the child. Their mental health also crushes. Mostly children face mental trauma when they reach to maturity.

It also has a negative impact on the benefit of the country. Because these children do not get any education, and increasing literacy, and slow down the country’s economic growth in general, reflecting the weakness of human development.